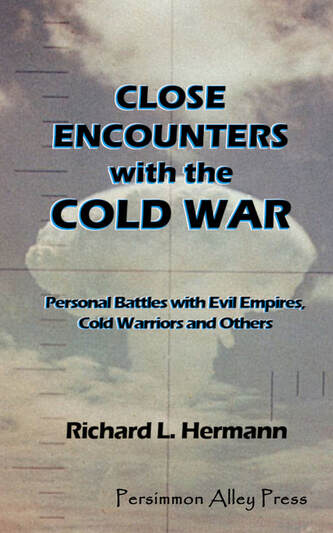 Close Encounters with the Cold War
Personal Battles with Evil Empires, Cold Warriors, and Others

Author Richard Hermann had a front-row seat during the Cold War. Close Encounters with the Cold War: Personal Battles with Evil Empires, Cold Warriors and Others is his bio-history of his and his Cold Warrior colleagues’ experiences during that nail-biting half-century. From childhood memories of being trained to “duck and cover” at the first sign of a nuclear detonation to growing up and participating in a world gone MAD—“Mutually Assured Destruction” being both an agreed-upon strategy by reputedly responsible political leaders on both sides of the nuclear divide as well as an acronym describing a planet driven to the brink of insanity by the ever-present threat of annihilation—meant a constant stream of news that kept us in a state of high anxiety. A drumbeat of fear-inducing headlines like those during the McCarthy era swirled, with absurdities like swimwear named after the location—Bikini Atoll—of 23 nuclear weapons tests. Periodic reminders that the Cold War was, indeed, a war included the Soviet Union’s successful Sputnik launch—a harmless orbiting metal ball that nevertheless sent the United States into a panic and launched the space race—the Cuban Missile Crisis, the Vietnam War, various other proxy wars around the globe, and the occasional arrest of spies in our midst. Indeed, the Cold War left a lasting legacy, including dangerous lingering radiation levels from bomb testing and nuclear accidents like Three Mile Island and Chernobyl. This last effect will plague life on planet Earth for generations, assuming of course we don’t all die first from the effects of man-made climate change. Indeed, the post-World War II era, viewed at its onset as a promising dawn of new prosperity and innovation, has left us a toxic legacy. That mankind avoided self-extermination during these decades was more dumb luck than a testament to human wisdom.Richard Hermann, author of 12 prior books, was involved in much of the Cold War history described above, from his service in an Army Atomic Demolition Munitions unit to later assignments as an Army and then civilian lawyer working on national security issues. Close Encounters with the Cold War recounts many of his personal experiences against the broader backdrop of this crucial era. Occasionally humorous, often frightening, and always insightful, this memoir will resonate with anyone who experienced the Cold War while providing an enjoyable yet educational read for those who came later.

​​Ebook available for $8.96 from Amazon.com.
Paperback for $24.75 - Order here
​
Also available from Amazon UK and other Amazon sites.